We had thought it was Spring. Snowdrops nearly over, crocuses blooming nicely, likewise the hellebores. One or two daffs opening up.

Then, whoops! 36 hours of teeny flakelets of snow, biting winds, zero temperatures....we crossed the river to the Pig on Saturday and felt we had made an arctic expedition!

We were peeved because we had to cancel an essential trip to Adelaide Walker for fibre and Bettys for tea (if anyone's supplies need replenishing, give us a shout out as we are rescheduling for later this week and could post from New York.). And we couldn't do the second (aargh) run to Ikea...would you believe, on the first, they had shelf unit side pieces but no shelves; a table top but no legs. We then thought we would order on line but that works out more expensive than going back.

This is for equipping the studio cheaply and effectively. But it worked out ok in the end a the weather meant that carrying stuff up the outside staircase would NOT have been fun, so never mind. We will get installed one day very soon, now. Then there will be photos, not to mention work actually done.

Sitting in by the blazing wood fire had been productive as well as cosy. I actually have an FO. This is Lucky Spirale, a free pattern from Ravelry. It is called a shawl, but in my book is a scarf of a rather interesting shape. Started narrow and widening as you go, the wider end stretches out to kind of balance the thing when wound around your neck. The yarn is from a very nice alpaca and silk that I got from Toni at the Fold a couple of years ago. More or less dk, nice flecks of silk, warm. A small thing, but I am pleased with it.

I have plenty more yarn, so have cast on fingerless gloves, very plain with a simple cable. Ah, yes, so simple! I have only had to frog once, having got my cable forwards and cable backs confused.......I still have time to finish them, if only on the plane, for the trip to New York City, so nearly upon us - nearly time to get excited........

The extraordinary weather is likely to be with us for several more days. I nearly walked in to this on my way out the door this morning. Again, totally unusual, at least so close to the house. 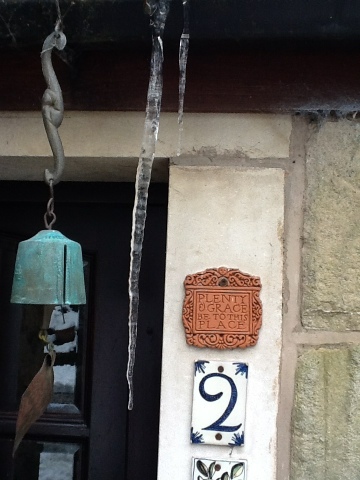 Posted by Spindlers2 at 7:54 pm No comments:

And other quoty type words associated with time. Good intentions failure, as well.

My lovely DMIL is always saying faintly to us that she doesn't know how we get so much done. I can never quite see it, myself, as from where I sit, an awful lot of time seems to be spent on the iPad.....however, I suppose it has been a bit hectic lately.

Flying visit to Cornwall to family-visit, all very nice. Lovely to see them all, and the sea! I did try to upload a video of the waves crashing in on the shore, but the file was too large.

We were hunting for photo-ops various for me, like rust, and abandoned hulks, with no success, but did find a rather picturesque back street. Since getting back, I have had a day at AH, playing with madder, which was fun; a day at Guild, with an extremely interesting talk by Val Bryant, on the research into old spinning wheels that she had been doing; and Bear Knitters followed by a visit to Toby! And finally......we have the keys to the studio, and are in the process of installing ourselves. We decided that it made sense to slap a coat of fresh white paint on the walls before we started moving things in, so we have been doing that today. It is a difficult space to photograph. I used the iPad for this, but will take some more when we are all installed. It might help me feel less of a fraud!

All exciting, anyway. I am doing stuff at home, but slowly, slowly. Tiding me over before the fun really begins!
Posted by Spindlers2 at 6:28 pm 1 comment:

It was an absolutely lovely day, so of course, we had to be inside all day!

Four times a year, members of the Bradford Guild demonstrate at the Industrial Museum - this is where we regularly meet, and is a repayment for getting the meeting room at a preferential rate, so fair dos.

Actually, we had a good day. Excellent company, some pleasant and interested visitors, and plenty of spinning done. I had taken my Sidekick, and a big bagful of lovely Polwarth and silk that had been lurking in the stash for far too long. Nearly filled a bobbin, but there is still a way to go, I think sufficient for a waistcoat. I was very interested to compare this blend, having been spinning a lot of merino and silk recently - I like this much better, there seems to be lots more character to it. I suppose merino is as ubiquitous as it is because it is so.......ubiquitous! Yeah, clear as mud - I mean, it is the commercial crop, so there is a lot of it for the craft market as well.

On the way over to Bradford, I noticed a Zwartbles sheep in a field not far away from home. Now that is something I need to keep an eye on. Although I imagine the owner is a spinner and all the fibre is spoken for.

I had wanted to stop off somewhere on the way home, but we were too late leaving the museum. So, we had to go out again later, there was someone very important to meet.

This (I hope, still not familiar with the process) is Toby, just over 24 hours old, and totally gorgeous. I am not usually one to go doolally over newborns, but he is a bit special. He was completely unfazed by prolonged cuddles with great uncle and aunt, and has won the DSM over completely. Demanding return visits soon, no less.

eta: the first photo doesn't seem to show up well on Blogger, so let's try this earlier one as well. 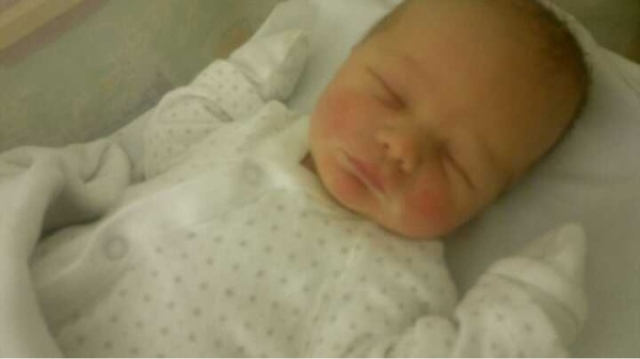 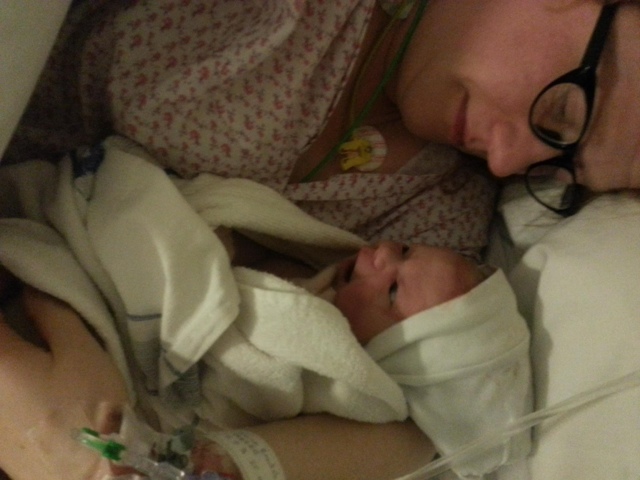