Back home again - and a little puzzle to end the year!

When I loaded the Blogger app to do this post, I noticed for the first time that there was a camera symbol at the bottom of the screen. In the spirit of adventure, I touched it, which loaded a camera (duh!) . So, as I wanted a shot of latest knitting project on the needles, I took that. Which put the image in a tray at the bottom of the screen, and that is as far as my techie abilities will take me! So, it may or may not show up in the published post.....(that is the puzzle!)

Another techie fail, too. When I bought the iPad, I also bought a keyboard. One year + later, I have just got it out of the box. OK, so I worked out how to switch it on, and even thought to go in to settings to activate Bluetooth (aaaargh!) but couldn't get them to actually talk to one another. So, some progress, I guess. Could do better.

OK, Christmas. Nice visit to DMIL, who is doing incredibly well for 97, and coped with five chatty adult offspring and hangers-on without resorting to - well, anything really. She isn't the type for violence....actually, I think she enjoyed herself. I certainly hope so.

Two main downers with this trip. The cottage we were I was lovely, but although it claimed to have wi-fi, and our three separate devices claimed to be connected to the network - they weren't. Extremely frustrating. Hence, I promise you, the lack of blog post.

The other thing? The *#%€¥$*&@!!! weather. It has rainedandrainedandrainedandadinfinitum and is still so doing. Back here, the rivers are running high, but the rain is steady rather than cloudbursty so we do not have a torrent coursing down the lane and threatening the house, although we did put the sandbags in position before going away as a precaution. I hope I have just inserted a pic of the view from the kitchen window. We shall see.

So we didn't do all that much while we were away. A few short strolls in between rain showers (the torrents were at least overnight). We couldn't get access to our favourite beach as the roads down to it were closed, presumably through flood or land slip. This really is getting beyond a joke.

But as we had been able to visit Get Knitted on the way down, I had been successful in acquiring some Cascade 220 to make a Swirl jacket, so I was able to get that cast on. The fun bit was joining the round. You are instructed (and I would have done anyway) to work three rows and then join, but this would have been shall we say incredibly interesting without help. I had cast on around 560 stitches on a circ that only just held them workably. So I borrowed all the spare cables and tips various that my sister had with her, spread out the stitches as straight as possible, and then prevailed upon my nearest and dearest to straighten them out and to keep them thusly whilst I effected the join!

So, now we are all safely back home, and despite the filthy weather very glad to be so. We have passed the Solstice, the turn of the year is made, and we can hope for the slow return of the light. Actually, I wouldn't mind some snow first.

No resolutions. No intentions either, at least not as yet. They may come in time. I may not yet have The Project I am searching for, but I have good stuff to be going on with, and some good things to look forward to in the weeks to come. I am about to go prepare a nice warming winter pie for our New Year's Eve meal, and we shall crack open a bottle. 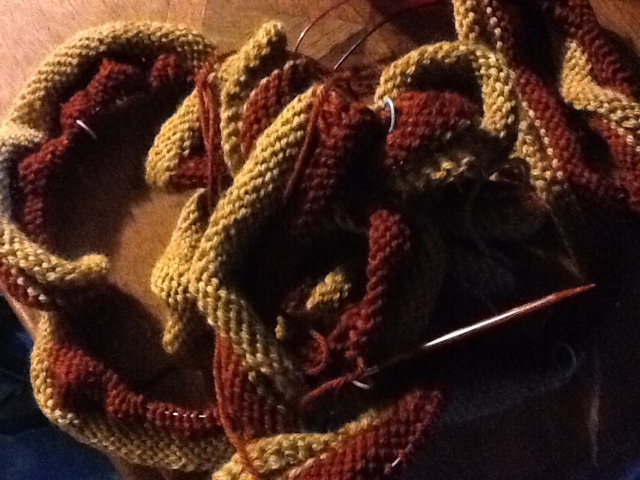 Posted by Spindlers2 at 4:08 pm No comments:

I've had a bit of a moment. I suppose, to be strictly accurate, several, that have just this evening coalesced into coherent thought.

Yes, really. I kid you not.

I have continued to be dilatory on the blog front. This is not because I don't want to blog. And it's not just because of the disaster that is the workroom, not to mention the geriatric condition of our desktop. (I am working on that one. It takes a while.)

A major factor is that, as I have said, there is not all that much fibre activity going on. All of a sudden, I can see that a large part of that is due to being stuck. The projects that I am working on are not working out.

One of them I can do nothing about. The finished object is so cute and irresistible that the great nevvie to be simply must have it. It will be great when finished, but the execution is a royal pain. Remind me never again to knit something with a bazillion teeny tiny body parts from a pattern that is not the easiest to follow, and that is going to have to be so carefully pressed and stitched after the drafted knitting is complete......I am SURE that there must be a better way to design such a thing!

All I can do about that is to keep on reminding myself that it will be worth it in the end.

The other thing is much harder to accept and to take appropriate action on. It is the latest shawl/stole.

Remember how I sampled and switched until my ears bled? Decided on a stitch pattern? It Isn't Working Out. I Don't Like it.

I love the yarn. I spun it well, it has a fabulous hand and appearance. But I still have not found the One True Way to make what I want to make. I need to frog, and rethink. And not only do I have to grasp that particular nettle, but I also need to decide whether or not to still focus on it, or if I should come up with something else to give myself breathing space.

I suppose, at least it helps having made this realisation! Watch this space. There may even be photographs.

In other news, we whisked off to see The Hobbit, in 3-D to boot, in the spiffy new cinema in Halifax. Well, not sorry I saw it. Will probably buy the DVD so as to have the entire opus. And it probably isn't true to say even that I was disappointed, as the book is not as dear to my heart as LoTR. But golly gee, way to much time devoted to hugely overblown battle scenes and far too much of a whiff of Pirates of the Caribbean about it, as in Our Heroes Various falling endlessly down chasms, etc, on or off bits of bridge or whatever and remaining entirely unscathed. H'mm.

OK, ladies and gentlemen, place your bets - will she post again before Christmas?
Posted by Spindlers2 at 7:26 pm 1 comment: