There were two little spinners named Pete and Carol. They enjoyed their craft, enjoyed their monthly Guild meeting, enjoyed reading the odd book and especially reading the only spinning magazine, from America, called Spin-Off. (This is pace the Journal for Weavers, Spinners & Dyers, because - not just spinning, duh!)

And in the pages of this magazine, they read every year of a gathering somewhere in America called SOAR, when all those lucky American spinners got together to - well, spin!

Gradually, they became aware that people from other countries were allowed to go as well, and our two little spinners idly dreamed that maybe, one day, maybe.......

And then circumstances swirled together the way these things do, and all of a sudden, miraculously, the grand Trip of a Lifetime came about, and our two little spinners were off to Oregon for their one and only visit ever to SOAR. And the States, btw. (Followed by a drive down the coast to San Francisco and then back up again, after all if you are going all that way for just the one trip of a lifetime, you have to pack in as much as possible, don't you?

And this may sound really goofy, but it was a life-changing experience, for many, many reasons. Some years later, another first time attendee was heard to say that in going to SOAR, she had found her tribe. That is a pretty good way to describe it. You got to meet a grand bunch of people, many of whom became good friends. (One of the bonuses since those olden days is, if course, the Internet. Gradually, we could keep in touch both individually and through things like Ravelry forums for those long months outside the one week if the year when we actually met in person, making the friendships deeper.). You also got the opportunity to take great classes with great teachers, and to really extend your skills. Not to mention exposure to a huge range of tools and fibres, the like of which had not yet fetched up on our shores. (This again is something that changed with the development of the Internet.)

So now here we are in 2013, and P&C - here comes the great and presumably not totally unexpected confession - have been to SOAR no less than seventeen times. The trip of a lifetime became a standing joke with friends on both sides of the Atlantic. (We missed twice, once because of insurance difficulties after an illness, once because of a clash with an important family birthday. We have also been to the States on other visits, but that is another story.

This story takes us from our first meeting with upside down spindles to becoming teachers of top whorl spindling amongst other things; to getting in to selling some of those spindles and thence in to the wonderful world of Woolfest and other events; to so many good things that have flowed from that first visit as at the same time the fibre world has changed out of all recognition in this country. We have done so many things both personally and 'professionally' that just simply would not have happened if we had never gone to SOAR.

So here we are in 2013, and in a few weeks, we are off to Shetland for the first time ever, where we have been invited to teach two workshops. We only get back a few days before SOAR, so quite reasonably, we took the decision that this would be another year that we would miss. We had regrets; but after all, there was always next year.......

Except that there isn't. It has just been announced that 2013 is to be the last SOAR ever.

This is one of those things that manages to be both a complete shock and not what you might call unexpected. Changes have been creeping in over the last few years, as changes do. Change is often dreaded, but in many ways it should not be, it can be a very positive thing. But what is going to be lost here more than anything is the opportunity to connect with the tribe. Some folk we shall no doubt meet in the future, but others, most likely not, without the most convoluted effort. The will would be there, but the logistical ability, not. These people I shall miss tremendously.

The fibre world is flourishing and vibrant. There is no lack of opportunity for learning or simply gathering. But I shall miss SOAR and I shall miss my friends. I think we are allowed to mourn some changes a little bit.
Posted by Spindlers2 at 3:38 pm 1 comment:

We have had one. At times, over the last few weeks, it has been by my standards very hot indeed. As a consequence, normal service has been considerably interrupted. Often by sloth, sometimes by indulging in summery activities like having a day boat on a canal, or visits to gardens.

There was one extremely warm and enjoyable weekend when we had the regular annual weekend shindig at Alston Hall. I didn't do a class, though, just spun a lot and chatted even more.

Visits to the studio have been few and far between as well, unfortunately. We did try it once or twice, and found it.....steamy, and not conducive to much real work. So, overall, little blog fodder and a lot of absence!

Now, whilst summer is not over,and indeed the weather is really rather pleasant still, we are back in the studio and very pleased to be so. Oh, we have been spinning and knitting at home, but it is going to be very nice to be more focused, at least as much as we ever are. And with Woolfest over for another year, and no more batts in desperate need of being made, the DSM and I lugged the Schacht Baby Wolf out of the house, in to the car and eventually up the steep metal staircase to get it in to the studio. And as I write, he is working on completing warping up for the project that has been brewing for more years (and I am quite serious!) than I would ever dare confess to. Who knows where this will end!

I am returning to the spinning project I was already working on. There are many more in the pipeline, and when I am a bit more organised, I will hopefully get something about them here. Meanwhile, I will leave this with a photo of a recently completed small project spinning some Bluefaced Leicester roving that I picked up at The Wool Clip. Deliciously soft, and even though it was a tiny bit neppy, it spun up into a lovely soft and even yarn that is going to make a super scarf.

Yes, it is good to be back! Summer is lovely, but so is us doing the things we enjoy so much. There is quite a bit to recap on, if I ever get a Round Tuit. But for now, it is off home to make supper from some of the Veggies! Growing! In! The! Garden! Another benefit of a proper summer...... 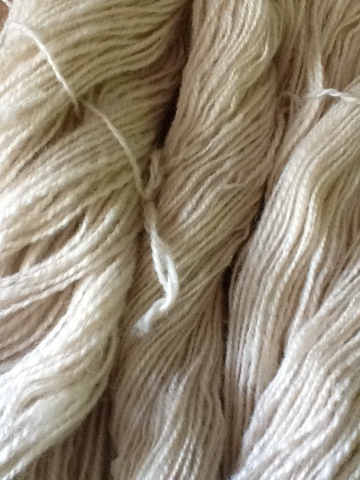 Posted by Spindlers2 at 4:53 pm No comments: