Time to cut my losses

I do believe that I have blathered at some length about some silk I have been spinning. I found it in the stash, so I only have an inkling of where I might have bought it. A near-perfect match to a lovely merino and silk blend.

I struggled. With a silk top or brick - this was the latter - I would normally pull off a chunk, fold it over my finger and spin with an extended draw. With this prep, I very quickly learned that this technique simply would not work. It was full of, well, for a better word, clumps. If I did an extended draw, these would obstinately refuse to draft out, leaving a huge and unwanted slub. I found that if I did short draw, sometimes I could catch this as they came through and manage to draft them, or if they still refused to co-operate, remove them entirely.

I still don't understand what was going on - sometimes the dye job was implicated, sometimes it was the silk prep, presumably badly prepped, all on its own. One of the most frustrating spinning jobs I have done in a while, and quite painful, too, hard on the hands.

We come to plying. I had spun all the fibre on to one bobbin, and deliberately chose, knowing all the risks, to ply from a centre pull ball. I REMEMBERED TO PUT A PAPER QUILL IN THE CORE. I start to ply.

The singles is much more variable than I had thought. Even though I had tried hard to mitigate the thicker, clumpy sections, I still had far more slubs than I liked. Ah well, soldier on. Maybe it would not look so bad, be a useable yarn.......the paper fell out of the core.

Quick as a flash, I stuffed my thumb approximately into the middle of the centre pull ball, and continued. All was going quite well until the phone rang, and the DSM seemed to be having problems with something. I stopped plying, and TOOK MY FINGER OUT. (Sometimes, extracting ones digit is a Good Thing. Not this.)

Almost immediately I started plying again, disaster struck. Trying to sort that out, disaster was piling upon disaster. I got the scissors, and cut myself free, took the time to look closely at the plied yarn.

I not only cut the yarn, I cut my losses. I should have done it sooner. Just means a slightly different project is all. With no silk yarn.

No doubt I have learned something from this, right? 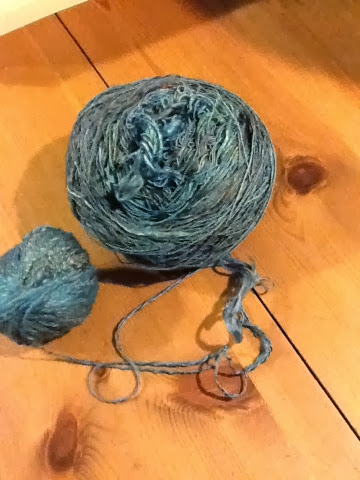 Posted by Spindlers2 at 4:43 pm No comments:

By which I mean starting the writing of this blog post all over again, as I had nearly completed Take 1 when I was interrupted by a person from Porlock (actually the DSM) and in the kerfuffle, I closed down Blogger on my iPad without saving to draft.

Such a shame. I had waxed poetical about the meadow and woodland outside our windows turning to golden shades of autumn almost over night plus various other lyrical stuff. All gone. Can't remember anything much of it at all. I shall just have to be more pedestrian.

After a week back recovering from our travels, and in my case the minor ailments that each travel gifted me, this week has been all about the studio. I cannot tell you how good it has been to get back in there, even though this had meant studio duties as well as work/play. Because this is a co-operative we belong to, we have to share a cleaning rota (public spaces, not just our own) and have other responsibilities. Himself grabbed something to do with website, IT or whatever, whilst I was a bit slow and got Health and Safety. Not, actually, that I mind too much. As far as I am concerned, H&R gets a bum rap, and is really just Common Sense. I don't have to do much. Although filling in our own studio's risk assessment form might be a good thing........

But we are coming up to the Christmas Open Studios weekend, so had to have a Meeting. This, I have to say, was very much like a bazillion other meetings that I have been to for various groups over many years. In other words, I a) glad when it was over; and b) glad to have a nice straightforward job like making soup to feed the masses who will visit.

However, it did turn my attention to what I intended to do about the event. Although the main import is simply to be there, talk to people, show what we do, &etc, with no compulsion to sell anything, it did seem to me that I could kind of kill two birds with one stone and combine what I felt like working on at the moment with producing some cute little skeins of ooh shiny! yarn that wouldn't cost too much.

When at SOAR, I had been in the right place at the right time and acquired a couple of goodies in Deb Menz's yard sale. A hackle and a pair of Viking combs. I love producing multicoloured yarns on a hackle (which is all Deb's fault, anyway). I do a class on creating multicoloured yarns without dyeing, hence being so pleased to pick up some extra tools. And I hadn't done any of it for a while......this definitely seemed like a good time. The tops set up on the hackle (in this case, my Peter Teal.) The fibre dizzied off, and ready to make a smooth, worsted type yarn. The short stuff left behind on the hackle. I did actually get more off after this was taken, but as I had packed it down rather to much, it was a but hard on my hands and I ended up with a blister! Deb advocates re-combing (I think - need to refer back to the book!) the top before hackling, which might prevent this, and quite so much waste. I will try that, but in this instance, I want two small co-ordinating skeins, one smooth, one fluffy. Photos of those later.


Footnote: in moving between Flickr and Blogger, I may have got the photos in the wrong order. In which case, just use your intelligence...........
Posted by Spindlers2 at 9:57 pm No comments: